Bibhutibhushan Bandopadhyay had many great works featuring the then social, natural, economic, political, religious, cultural, and rural picturesque. He successfully demonstrated how society, religion, nature, and life of the human being are interlinked.

His autobiographical works like Pather Panchali (The Song of the Road), Chader Pahar, Aranyak are the precious gems for the Bengali literature of all times.

In order to commemorate his contribution to literature, Bibhutibhushan Bandyopadhyay is posthumously awarded the most prestigious literary award in West Bengal Rabindra Puraskar (1951).

This article will be discussing a short biography of Bibhutibhushan Bandopadhyay.

Bibhutibhushan Bandyopadhyay was born on Wednesday, September 12, 1894, in the village of Murtipur in the 25th Parganas district of Bengal.

His mother was Mrinalini Devi and his father Mahananda, who was a priest, Sanskrit scholar, as well as a professional composer and reader of stories based on mythology. Of the five children, the eldest daughter-in-law died at an early age.

Bibhutibhushan Bandopadhyay spent such a difficult time in his life, reflecting on that lonely feeling in his writings reflecting that this distinguished personality was employed in various occupations.

He attended school, became an estate manager and secretary for financial support to his family.

Bibhutibhushan’s childhood and adolescence are in extreme poverty. However, he completed high school, intermediate examination, and then a B.A. Distinguished from Ripon College. However, he had to quit further studies and take up the teaching profession.

At first, he started with a school in Hughli’s Jangipur and later in Harinabi, and he studied in the schools in the village and did other work for a living.

Bandyopadhyay was very meritorious since his childhood. He performed well at Bongaon High School which one of the oldest and standard institutions in British India.

In continuation of his talent and passion, Bandyopadhyay attained a first division in the Entrance and Intermediate examinations from Art.

Subsequently, he pursued his undergraduate degree in various subjects, economics, history, and Sanskrit at the Kolkata Surendranath College which was then called Ripon College.

Despite poverty, his passion for education encouraged him to admit to the master’s degree (MA) as well as in Law classes.

Unfortunately, despite his interest to have a postgraduate course at the University of Calcutta, Bandyopadhyay could not afford to enroll for the financial crisis of the family.

He had to start a professional career as a teacher in a school in Jangipara, Hooghly in order to meet up with family needs.

In fact, he was the eldest child of his parents and had to experience dire poverty in the family.

From early childhood, the incredible beauty of rural Bengal fascinated Bibhutibhushan. It attracts the reader in all his writings.

He first published a short story presentation of ‘Parikshita’ in the expatriate magazine in 1222.

His most famous and favorite novel, Pareth Panchali (Paret Panchali) was written while he was in Bhagalpur.

Bibhutibhushan worked as a traveling publicist for Goraksini Sabha. He was involved with Khelatchandra, which was a prominent name in music and charity at that time.

Bibhutibhushan also has worked as the secretary for Khelatchandra Ghosh. He tutored in Khelatchandra Memorial School for some time.

Later, Bibhutibhushan worked as a teacher at Gopalnagar School until the last day of his life. He was a Sanskrit scholar by profession.

When he was 46, Bibhutibhushan was married to Ram Chattopadhyay. In 1947, their son Taradas was born.

Several of his books were made by Ray Satyajit Roy (Apu Trilogy with Pather Panchali, Aparajito, Apur Sansar, and Apache Sankal; and renowned directors like Ashani Sangket) and won national and international awards.

Bibhutibhushan’s writings not only convey the suffering, poverty, hope, racism, superstitions, and dreams of rural Bengal, he was also attracted to the natural beauty of the desert.

This is shown very nicely in his novel Aryan. He was awarded the posthumous Rabindra Award for his wish novel in 5.

Vibhutibhushan spent the first days of his life in extreme poverty. But nevertheless, it did not have any effect on his education.

By removing all obstacles, he has finished his bachelor’s in history. He then tied up with Gauri Devi, who died a year later while giving birth to a child.

With the publication of this literary work, he became one of the leading writers in Bengali literature.

One of the most famous Bengali filmmakers, Satyajit Roy, made the film on this novel. Bibhutibhushan Bandopadhyay’s biography informs us that he wrote many books and novels.

His only son Taradas Bandyopadhyay was also a successful writer in the Bengali language with many exemplary contributions. 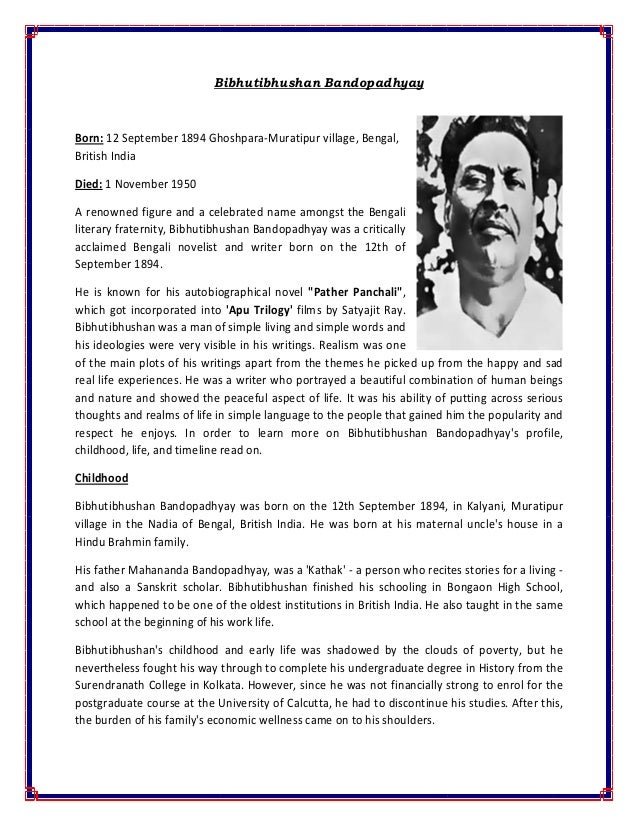 On Wednesday, November 1, 1950, this famous man gave up his last breath. Bibhutibhushan Bandyopadhyay died at the age of 56, during his stay at Ghatashila, caused by a heart attack, leaving behind all his family, wellwishers, and contributions.