He was a fascinating artist with many street arts, as well as art both raw and naïve still influences many promising artists today. In this article, I am going to share some of the Jean Michel Basquiat facts.

Jean-Michel Basquiat was born in Brooklyn city, New York, on Thursday, December 22, 1960, after the sad demise of Max, his older brother.

He became famous as part of SAMO, an informal graffiti in Manhattan during the late 1970s when rap, punk, and street art were emerging with hip hop music.

He was excellent in neo-expressionist paintings and became the youngest artist to ever exhibit at Documenta in Kassel.

In the next year, he was famous for his contribution as the youngest to exhibit at the Whitney Biennial in New York.

As he was born and brought up in A multicultural home, he could easily grab Spanish, French, and English.

Jean Michel Basquiat shifted to Lower Manhattan, leaving his parents in his parents’ home in Brooklyn when he was 17 because of the rejection from his father due to dropping out of the school.

He lived with friends, and then in the streets. For survival, he used to sell t-shirts and attractive homemade postcards made on his own.

6. In touch with great mentors

For some time in Los Angeles, Jean-Michel Basquiat came in touch with prominent Larry Gagosian and Madonna.

He had a car accident in his childhood that caused him severe internal injury. In the hospital bed, her mother gave him a medical book named “Gray’s anatomy” that came into a living inspiration to Basquiat later on.

He kept his band’s name Gray and followed the artistic imagery style and symbols from the book.

Basquiat had an intense passion for music and created a noise rock band named “Gray”. Under this band, he produced a hip hop record called “Beat Bop” that featured Fab five Freddy and Rammellzee.

Basquiat himself designed the cover of the single, which was attractive and both art and record collectors loved this.

9. Member of the Brooklyn Museum

At the age of 6, he had been a member of the Brooklyn Museum, by inspiration from his mother. In order to encourage his artistic talent, his mother used to take him to art museums since his childhood.

When he was only 21, Basquiat exhibited at the documenta VII in Kassel, Germany as the youngest artist. At the age of 22, Basquiat was the youngest to exhibit at the Whitney Biennial in New York City.

Earlier, both the Museum of Modern Art as well as the Whitney Museum of American Art rejected Basquiat’s artistic work to exhibit.

This rejection spurred his motivation to work more intensively and come out with further tune and maturity.

Basquiat could not open a bank account in the early ’80s. He had to put his money by personal means, in his loft, hidden under rugs, behind the wall portrait, under the cushions of his sofas and in books.

Along with his friend and collaborator Al Diaz, he had been a graffiti artist by the nickname “Samo” meaning, Same Old Sh*t.

In order to get noticed by the audience, he used to strategically place his artwork around galleries and museums where famous artists hung out their work.

This strategy worked several times as he was noticed by many others, for example, the magazine “Village Voice” appreciated him for getting noticed this way in 1978.

He used to appear live in a regular public access television program TV Party with art writer Glenn O’Brien’s in 1979.

He also appeared in O’Brien’s film Downtown ’81 that also coincides with his nearly autobiographical character.

Along with works of Keith Haring, Kiki Smith, Jenny Holzer, and Kenny Scharf, Basquiat had his first exhibition in an abandoned building— the landmark DIY Times Square in 1980

It was 1980 when lead singer Debbie Harry and her boyfriend Chris Stein bought Basquiat’s first painting for $200. Basquiat successfully appeared in a music video for Blondie’s song “Rapture.”

Along with Julian Schnabel, Kenny Scarf, and Francesco Clemente, Basquiat was considered one of the leading figures of Neo-Expressionism, an art movement that reemphasizes the supremacy of the human figure in contemporary art.

During his lifetime, Basquiat has produced around 1500 artwork and drawings, and among these, around 600 are paintings as well as many sculptures and mixed media works.

He was a prolific art worker and could paint at any situation, used objects around him as surfaces when the paper was not immediately at hand to work on. 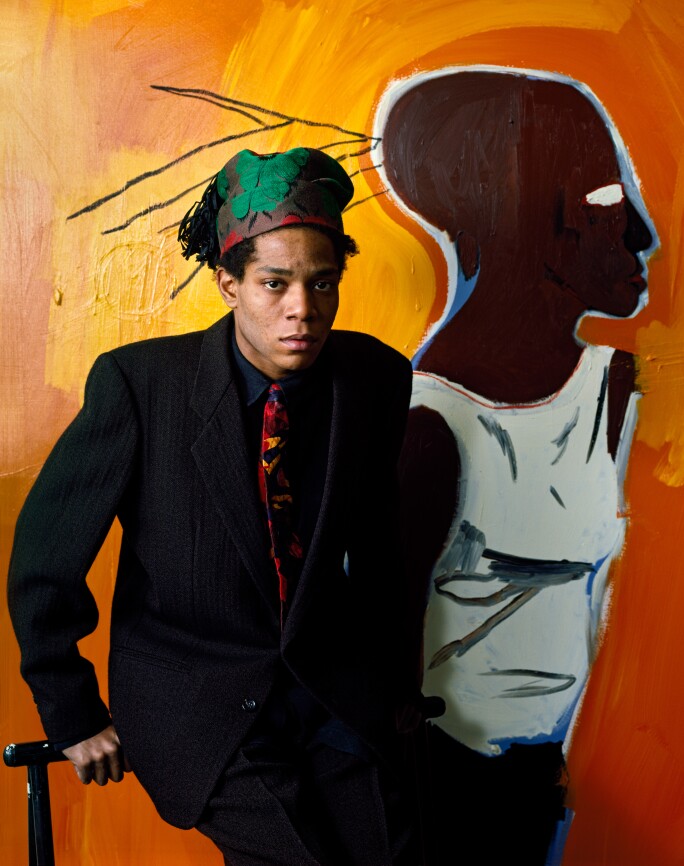 It was quite shocking as only at the age of 27, Basquiat died of an accidental drug overdose on Friday, August 12, 1988, at his Great Jones Street studio, where he used to pass much of his time. He was buried at Green-Wood Cemetery in Brooklyn.

Since his death, the prices of his work have steadily hiked in price value and appeal. One of his 1982 paintings featuring a black skull with red and black rivulets (Untitled) was sold for $110.5 million.

The artwork turned out to be one of the most expensive paintings ever purchased at a Sotheby’s auction in May 2017 with a record price.

Basquiat used to produce cartoon-inspired drawings since his childhood, encouraged by his mother’s interest in art and drawing.

Basquiat produced his drawings in many different media, mostly with ink, pencil, felt-tip, or marker, as well as oil-stick. Moreover, he used Xerox copies of fragments that came out of his drawings to paste onto the canvas of larger-scale paintings.

Basquiat converted his poetry, drawing, and painting, and married text and image, abstraction, figuration, and historical information mixed with contemporary critique to create a different genre.

I hope this article on Jean Michel Basquiat’s facts was worth reading.