Mother Teresa was the emblem of kindness, benevolence, mercy, care, forgiveness, and philanthropic activities. Being inspired by her activities, contribution, and dedication, people all over the world revere this universal Roman Catholic nun from the core of heart. This legendary figure and the hallmark of purity and charity have rendered a lot of interesting and fun facts that give us more and more respect for Mother Teresa.

In this article, I am going to share some of the fun facts about Mother Teresa.

Hope for the poor and destitute, the great soul Mother Teresa was born on Friday, August 26, 1910, in Skopje (modern Republic of Macedonia) in a respectable and solvent family. It is to be noted that, in 1910 Skopje was a part of the historic Ottoman Empire.

The real name of Mother Teresa was Agnes Gonxha Bojaxhiu.

Mother Teresa celebrated 27 August to be her real birthday as on that day she was baptized.

When Mother Teresa was 8, her father died, leaving behind the whole family in a destitute future of instability, crisis, and insecurity.

At the age of 18 in 1928, Agnes Bojaxhiu headed to Ireland in order to join the Sisters of Loreto in Dublin in order to be a nun. There, she adopted the name Sister Mary Teresa to honor Saints Therese of Lisieux and Teresa of Avila.

Teresa’s lifelong goal was infused in her childhood from her mother who was a pious and kind-hearted woman. She was very sensitive to the poor and lavishly shared charity for the underprivileged.

Teresa found poor people coming and going to their house as her mother used to share food with them.

“My child, never eat a single mouthful unless you are sharing it with others,’ was the moral of her mother given to her daughters.

Since childhood, Mother Teressa had a fascination, positive impression, curiosity, and charm with missionaries. At her 12 she was determined to dedicate herself to a religious profession.

10. Last meet with mother and sisters

Teresa left for Ireland at age 18 in order to be a nun, leaving behind her mother and sisters. And, she never saw or met them again during the rest of her life although she lived till 87 years of age.

When she was 18 in the year 1928, Mother Teresa visited Ireland in order to join the Sisters of Loreto at the Institute of the Blessed Virgin Mary.

It was a universal community of nuns with their religious missions in India. After having her English education, Teresa was sent to the Sisters of Loreto convent in Calcutta, India.

In Calcutta, (now, Kolkata) India, Mother Teresa (she was named Sister Teresa at this stage) started her career as a history and geography teacher at a high school named St. Mary’s in order to teach rich daughters.

Teresa stayed in this setting for 15 years and enjoyed the work, but was distressed by the poverty she saw all around her.

She still felt an urge for the poor and destitute and thought to pause the teaching of the girls in the school.

Rather, she decided to start a new life in the slum with the poor, distressed, and underprivileged society.

It was 1948 when she moved to a small rented hovel in the slums so that she could start work that she had desired since her childhood. 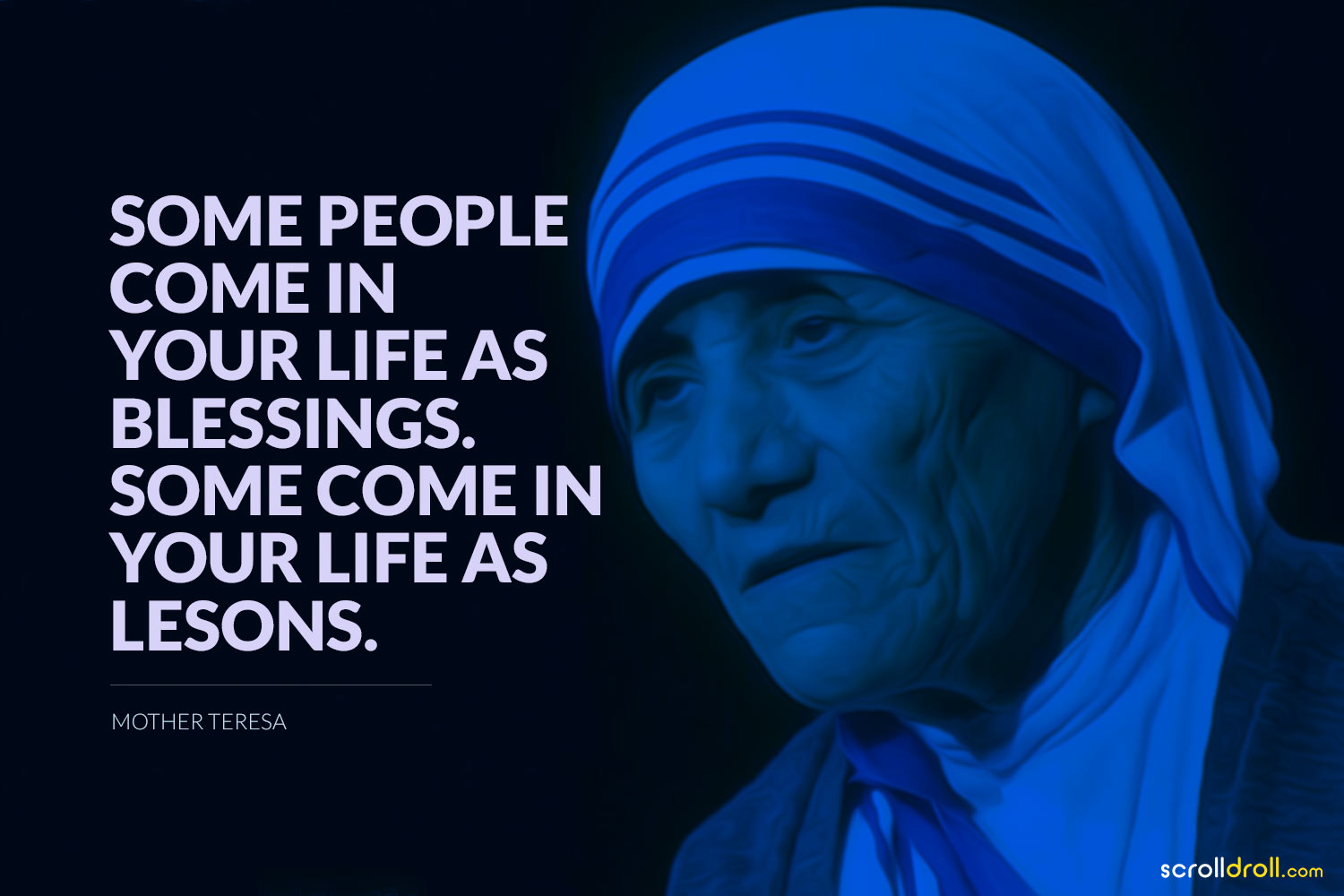 15. and sacrifice in life

The beginning of the slum life was not very easy. In fact, Teresa had to sacrifice a life of comparative comfort and secured yearning.

There she had to embrace the hardship, insecure income, and living that resulted in begging. The way she left behind was still open and tempting, but Teresa was hard and determined to move on to her goal.

Teresa’s first mission in the slum was to teach the poor children basic learning in order to educate them, by keeping her earlier teaching experience in mind.

After coming to Calcutta, India, and learned Bengali to communicate with the common people and the poor whom she would be coming in touch within the near future. Teresa reached India with the equivalent of 5 Rupees in her deposit.

Mother Teresa was fluent and could speak five languages in no time. She could converse in English, Albanian, Serbo-Croat, Bengali, and Hindi during her lifetime.

After receiving the prize, Mother Teresa was asked: “What can we do to promote world peace?” Mother Teresa replied, “Go home and love your family.”

Mother Teresa never sought to convert people to Catholicism she used to encounter. Rather, she desired to bring people closer to the Almighty, so that they understood God.

She used to visit the family to know about the needs of the children in order to help them as and when needed. She opened an open-air school for children.

By 1950, Teresa initiated a volunteering charity in order to support extensively “the hungry, the naked, the homeless, the crippled, the blind, the lepers, all those people who feel unwanted, unloved, uncared for throughout society, people that have become a burden to the society and are shunned by everyone.”

Teresa initiated a hospice for the poor, which was also a home for sufferers of leprosy and diseases, and a home for orphan kids and homeless youths in order to give them new hope and fresh future life.

One by one initiated a leper colony, orphanage, nursing home, family clinic, and a string of mobile health clinics in order to make a complete cycle of help and service.

During her lifetime Mother Teresa was honored with numerous awards and achievements, among many other awards and recognition, Indian Padma Shri (1962), Pope John XXIII Peace Prize (1971), United States Presidential Medal of Freedom (1985), Albania’s Golden Honour of the Nation (1994) and, most significantly, the Nobel Peace Prize (1979) were notable.

Mother Teresa opened her first house of charity in the western world in New York, the US in 1971.

Teresa refused the traditional Nobel honor banquet, with a request for the awarded budget of $192,000 to help the destitute of India.

28. a Continued effort to her goal

Mother Teresa restlessly kept going with her work to help the poor for the rest of her life and led her Missionaries of Charity till several months earlier, her death Sept. 5, 1997.

Mother Teresa was canonized on September 4, 2016, after being beatified in 2003. Pope Francis declared her a saint, yet noted, in a ceremony at St. Peter’s Square, “With great spontaneity, I think we will continue to call her Mother Teresa.”

30. What did Mother Teresa say before she died?

While the doctor tried to keep her away from her work due to her deteriorated physical condition after he fourth heart attack, Mother Teresa said ‘I can’t breathe’ (because I am out of my work).

I hope this article on fun facts about Mother Teresa was worth reading.